The Mediterranean origin of products at ‘Gusto reveal the tones and flavours of tradition. The genuineness of our gastronomic customs, of the raw ingredients are rediscovered here, as well as the desire to regain control of spaces and moments that give importance to the right to a break. Sitting round the table is a moment for consideration and a symbol of aggregation, friendship and sociality. 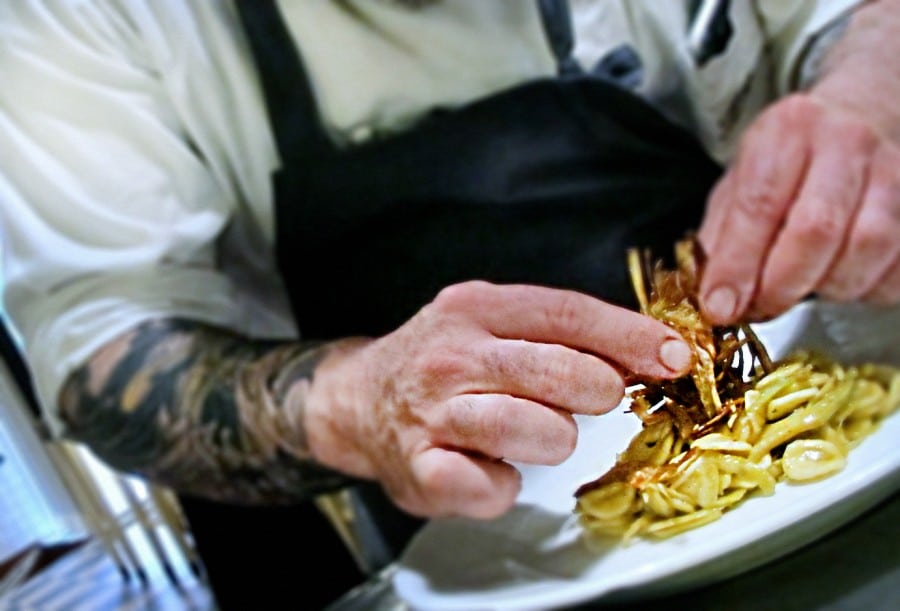 The Italian flag flies in the kitchen and is conveyed by the typical recipes of the Lazio region, with dishes capable of bringing back olfactory memories in those eating them. There are also “Chef special” that vary on a daily basis according to what’s available at the market.  In the kitchen of the ‘Gusto there is no rigidity among the roles. It’s a team of great cooks, passionate experts with a single goal: quite simply to make people eat well.

Among the antipasti of Rome, the fried Roman cod is among the most renowned. The cod fillet, desalted and without thorns, is breaded in a simple batter of flour and water, and fried in boiling oil. Served hot to the plate, with a slice of lemon, to the taste offers a tasty feeling of crunchiness, given by the breading, combined with the softness of the fish inside, for a taste experience not to be missed.

The fried zucchini flowers are another ‘mythical’ appetizer of Roman cuisine which combines the sweet taste of the zucchini flower with the flavor of the cream of anchovies, combined with the milk flavor of fresh ricotta and fiordilatte. A simple appetizer that reveals its incredible flavor, enriched by the slightly crunchy body of the fried batter, made with water and flour.

Renowned and appreciated all over the world, the first Roman dishes are characterized by a few ingredients with a strong and very caloric flavor: cheek and pecorino. The explanation of these peculiarities derives from the peasant origin of Roman cuisine, a poor cuisine handed down by shepherds and farmers who, with the few resources they had, had to guarantee an energy meal for the whole day.

Spaghetti or rigatoni, it does not matter, for a good gricia they are both good. Another authentic dish of Roman cuisine, gricia is made with a white base, guanciale and pecorino. The guanciale is a fundamental ingredient in traditional Roman cuisine and its use has origins that intertwine with the movement of the shepherds in the countryside of Lazio on the border between Abruzzo and Umbria, from which comes the pillow par excellence used for the first Roman dishes, Amatrice’s pillow. It is from this place that comes the original recipe of gricia. A simple preparation that includes as ingredients: Amatrice cheek, pecorino and fresh crushed pepper.

The original recipe includes the addition of lard in the pan, but you can also heat only the oil in the pan, to add the bacon, making it brown for a while ‘. In this way, the pillow loses part of its fat which, joining the oil will create a juicy base of seasoning. At this point you can add the drained pasta to the pan, along with a little cooking water. Remove the pan from the heat, add the pecorino cheese and blend the pasta sauce. In the dish, sprinkle the fresh pepper on the dough, taking into consideration the pepper already present in the pillow used.

The amatriciana can be considered a variant of the gricia, whose recipe just add some tomato fillets or peeled tomatoes. In the preparation phase, a hint of white wine and then the tomato are added to the cheek gauze in hot oil. While the sauce is left to cook, the pasta is served in salted water. The bucatini, long pasta pierced in the middle, is ideal for a full-bodied sauce like the amatriciana one. Adding the pasta to the sauce, the sauce is maintained by adding the fresh grated pecorino. A further sprinkling of pecorino cheese does not hurt the presentation of the dish and can add further flavor to the amatriciana bucatini. 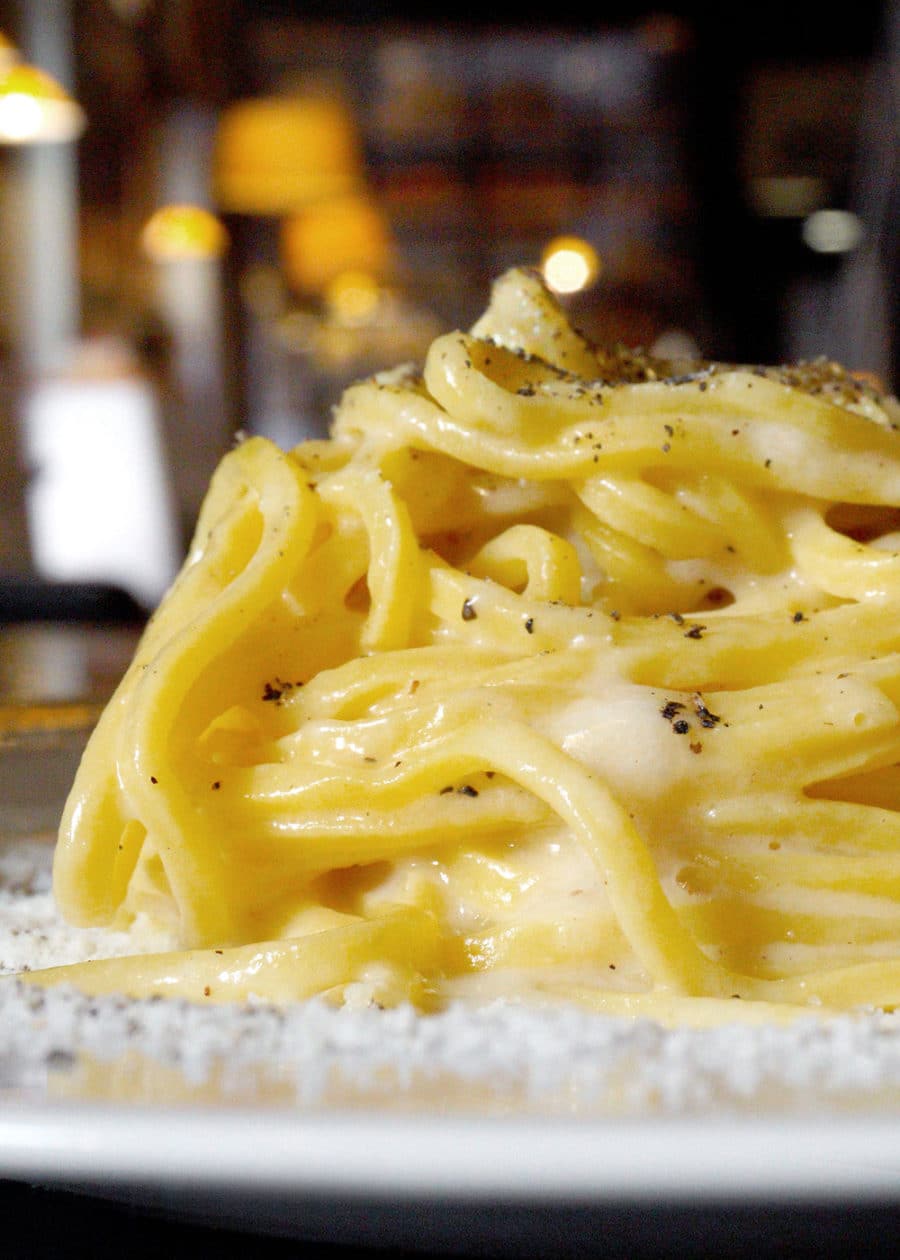 For the cheese and pepper, the name says, the only ingredients used are the cheese, pecorino romano DOP, seasoned and aromatic sheep’s cheese, savory and slightly spicy, and the pepper, which must be added freshly ground. I tonnarelli, fresh pasta, long and squared, is the best to serve cheese and pepper. The porosity of the surface of the tonnarelli collects and holds the seasoning so as not to leave anything lost in the dish. Although it is a simple recipe, it is not easy to make a creamy and balanced cheese and pepper. There are several procedures, but the secret to making the real cheese and pepper is the same for everyone and is in the creaming. The right creaminess of the ingredients, in fact, can be achieved by choosing to mix the pasta with cold condiments, or by combining the pasta just drained in a container already prepared with grated pecorino and freshly crushed pepper, to which you add a little cooking water to mix. Or adding cooking water in a pan with a drizzle of hot oil, the pasta just drained and, removed from the pan, skip the tonnarelli while dusting the grated pecorino. Finally the freshly ground pepper.

The result can be excellent in both cases, the important thing is to remember that the creaming must not take place on the fire to prevent the cheese from creating lumps removing creaminess. 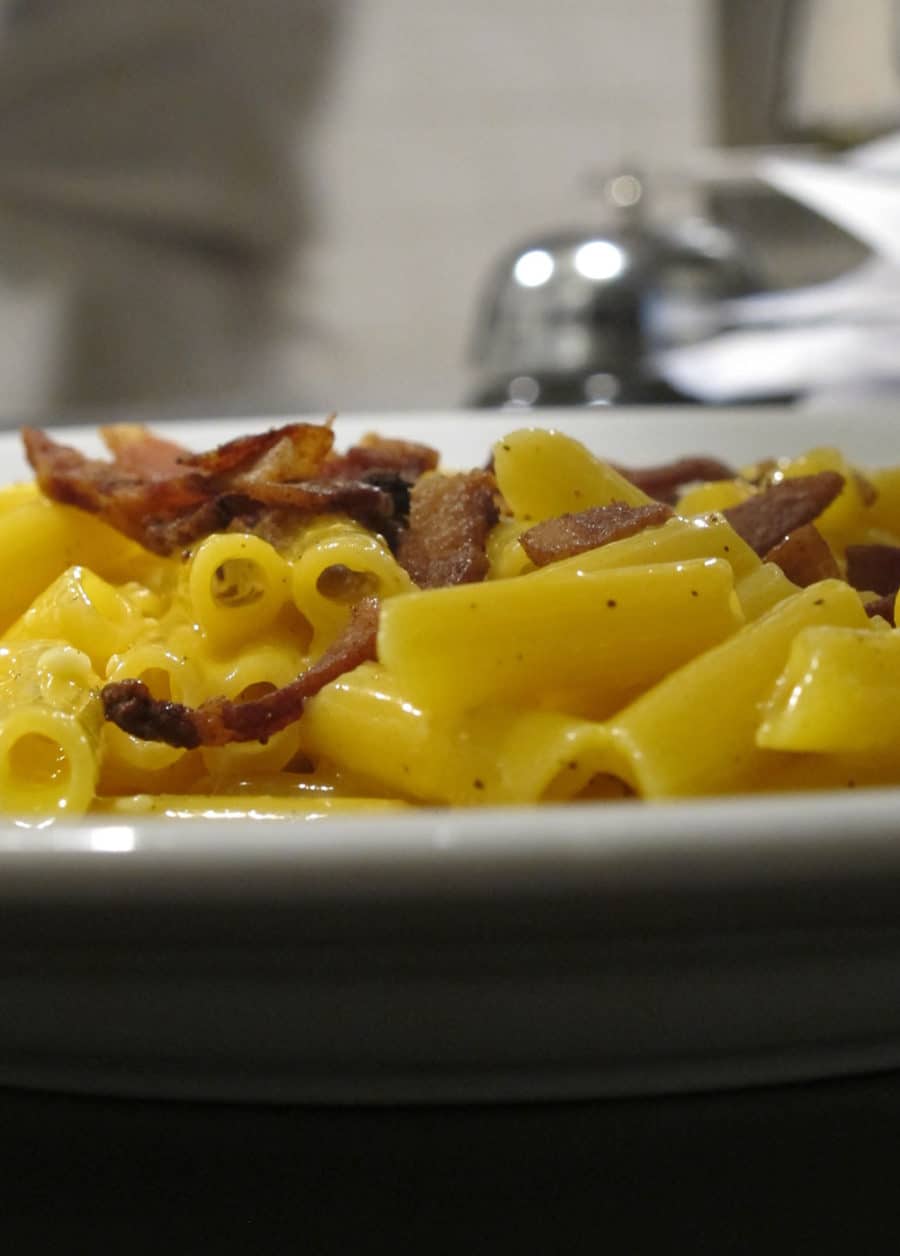 La carbonara, another first dish typical of Roman cuisine, is a relatively young recipe but fully entered in tradition. To the guanciale and to the pecorino, the egg is added as an ingredient. Carbonara is a particularly fast first course, which includes a seasoning that can be prepared while the pasta is boiling. Spaghetti is ideal, but for those who prefer short pasta, rigatoni and half sleeves are also good. The bacon must be heated in a pan (our advice is not to add oil until the right crispness is reached.One egg yolks are mixed in a separate container, one for each diner, plus one whole egg, and are beaten together with grated pecorino cheese If the pecorino is of a particularly tasty and spicy quality, you can also add parmesan to prevent the pecorino from overwhelming all other flavors.
The pasta, cooked al dente, should be added just drained and warm to the egg beaten with pecorino cheese and mixed until it reaches the right creaminess of the seasoning. Finally, add the crispy bacon with a little freshly ground pepper for those who like it.

The meat is the main food of Roman main courses, ‘Gusto proposes a representation of Roman cuisine, meatballs with sauce and lamb chops. 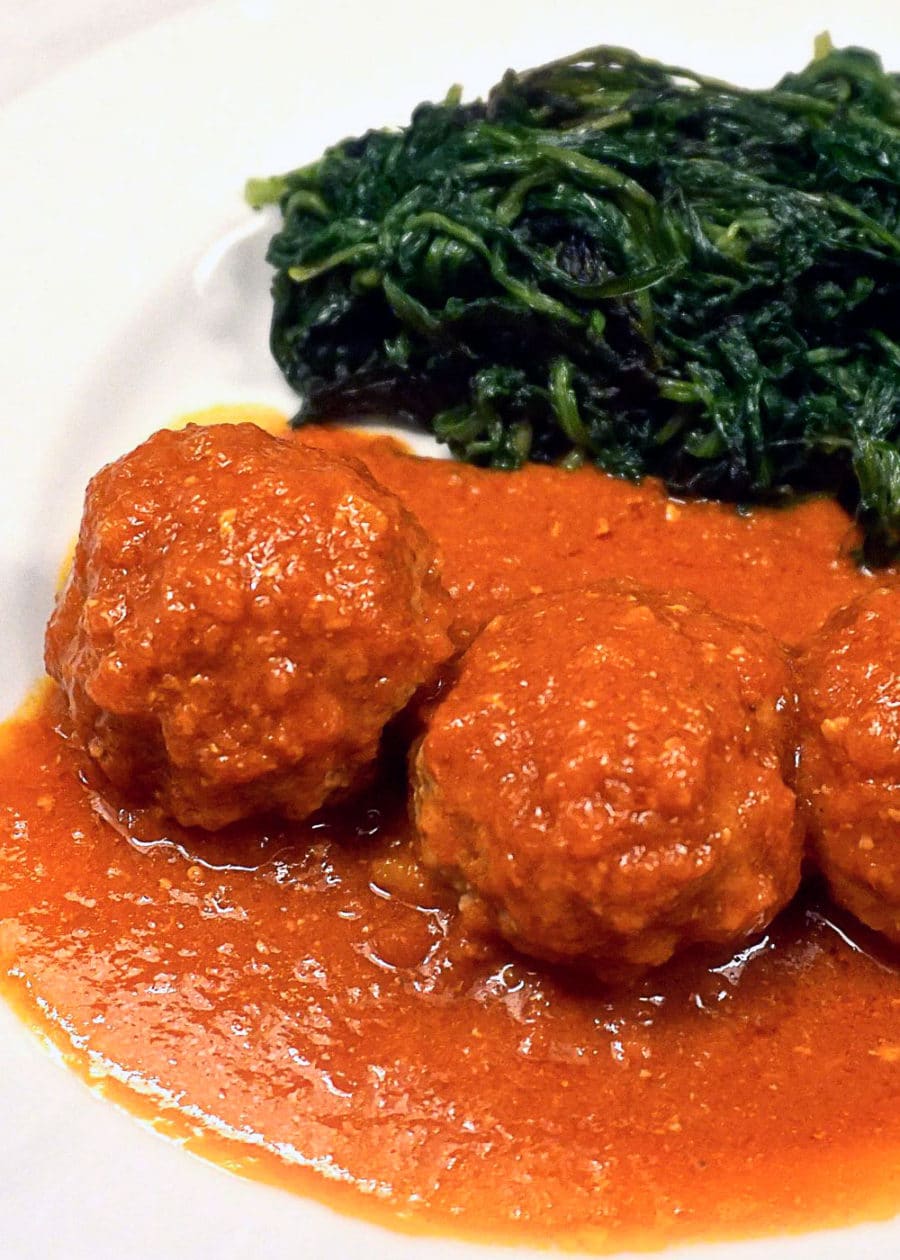 Prepare with the meat of the boiled meat to make the broth, the meatballs are a tasty dish witness of a poor cuisine that recovers the ingredients for the realization of different recipes. The meatballs are in fact made with chopped meat in small pieces, to which is added stale bread soaked in milk, garlic, parsley, nutmeg, grated parmesan, eggs, salt and pepper. The whole, once amalgamated, must be divided into round meatballs that before being joined to the sauce, prepared separately, can be fried or cooked in the oven, steamed or stewed.

The lamb chops correspond to the cut of meat called carré, excellent if cooked roasted. The carré is composed of lamb chops that must be divided with a thick cut to prevent the meat from hardening during cooking. In Rome the grilled ribs, commonly known as “scottadito”, are characteristic.

Ricotta and sour cherries, the ingredients of a typical Roman dessert

Ricotta and sour cherries are two ingredients at the base of a typical Roman dessert, which has its roots in the recipes of the Jewish-Roman cuisine that has had much influence in the preparation of many traditional Roman dishes.

Tart with ricotta and sour cherries

Ingredients once again very tied to the agro-pastoral tradition of Roman gastronomy are used for this Roman tart, the ricotta is strictly sheep’s and the sour cherries are berries of which the Roman countryside abounds. On a base of shortcrust pastry a layer of ricotta is spread, mixed with sugar, eggs and sambuca. To this a layer of sour cherry jam is superimposed. A very easy and fast preparation for a must-have dessert. ‘Gusto proposes this tart in the menu of desserts along with the variant that replaces the marmalade with the drops of chocolate. 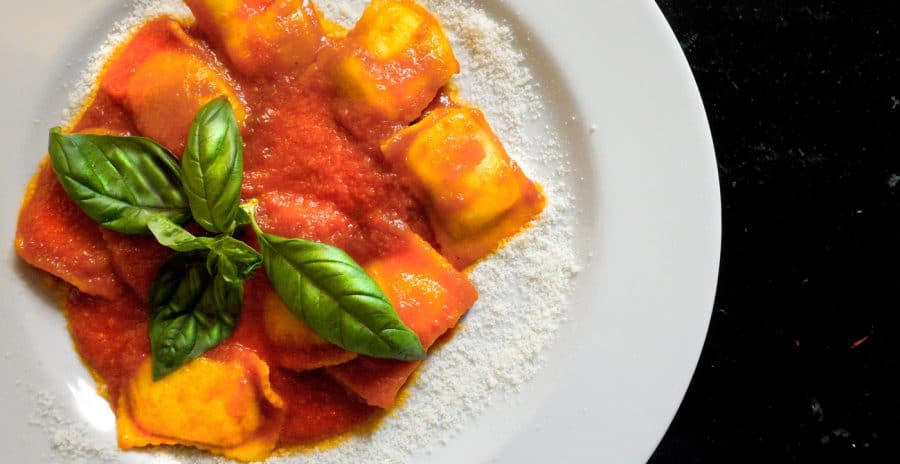 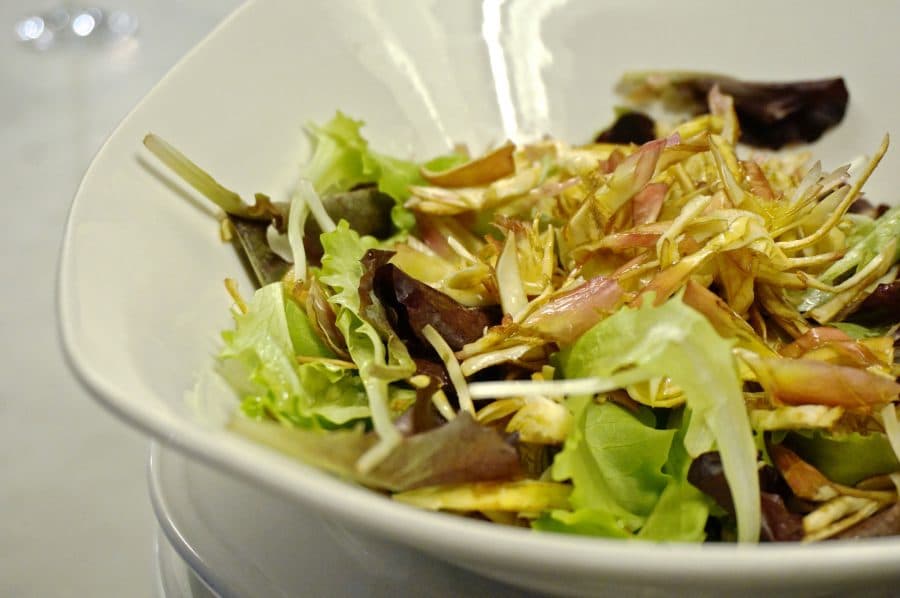 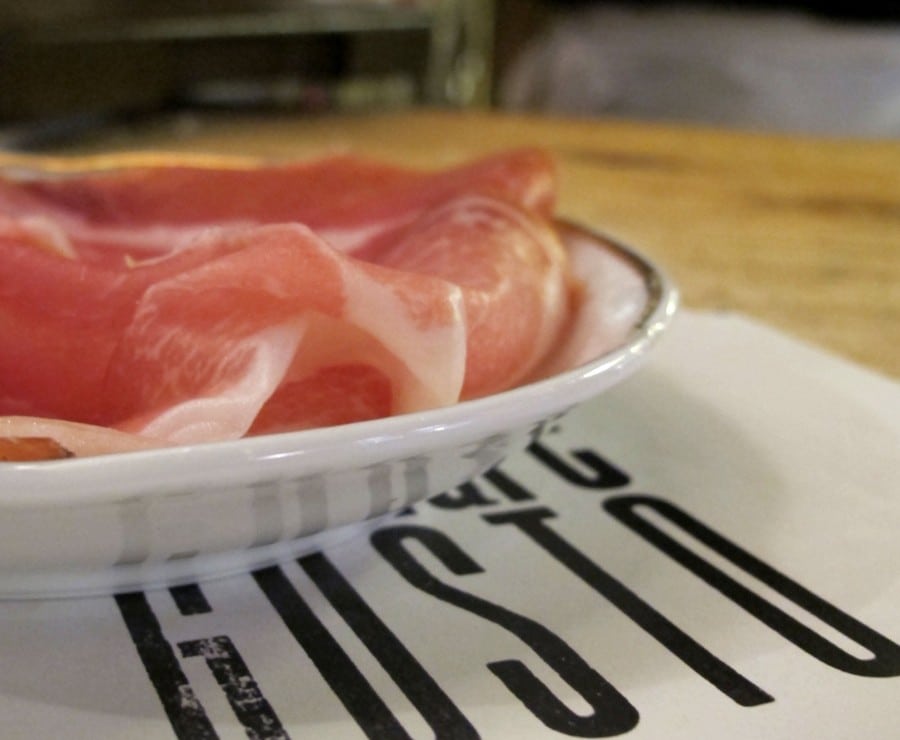 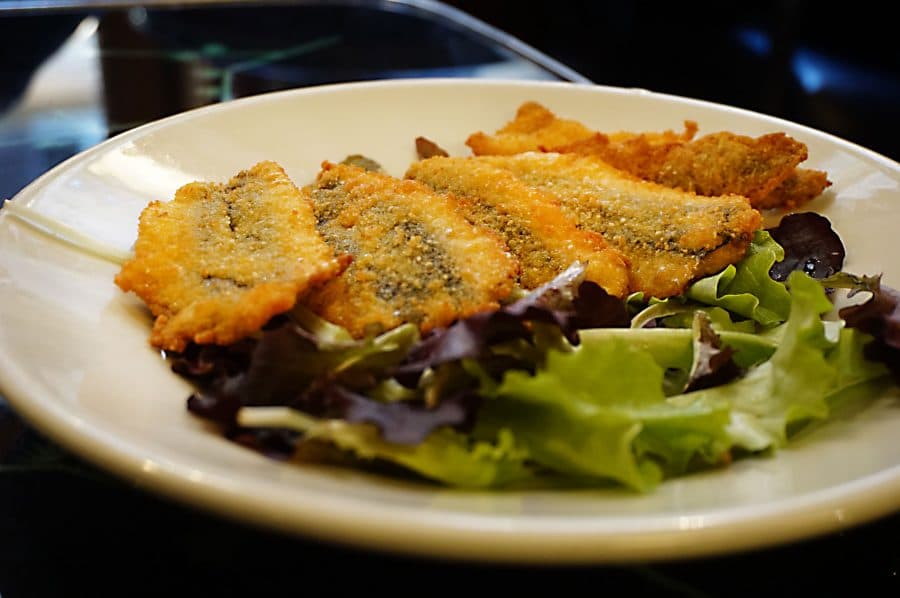 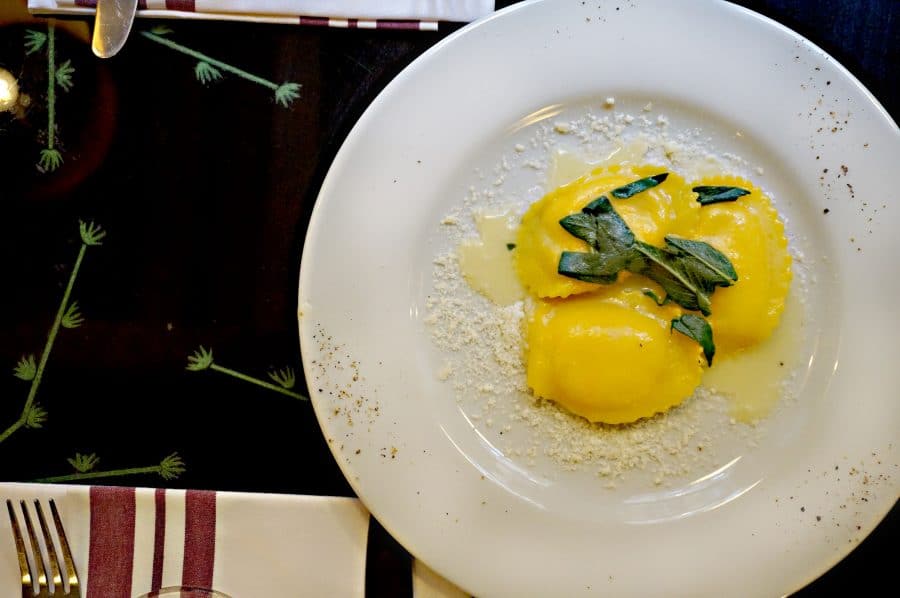 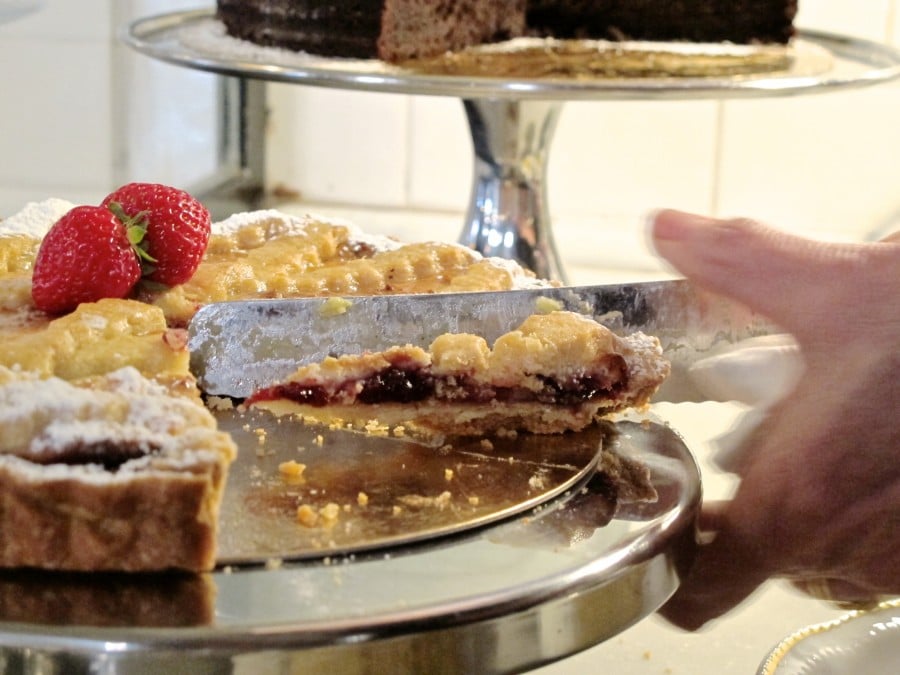 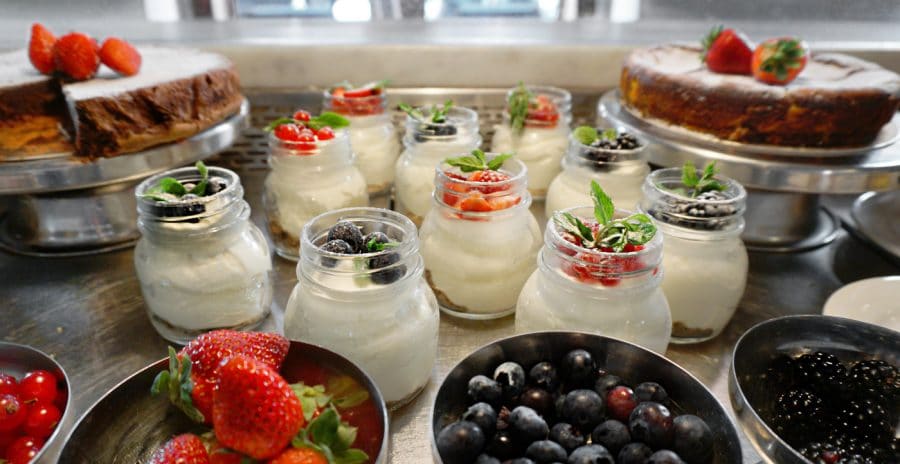 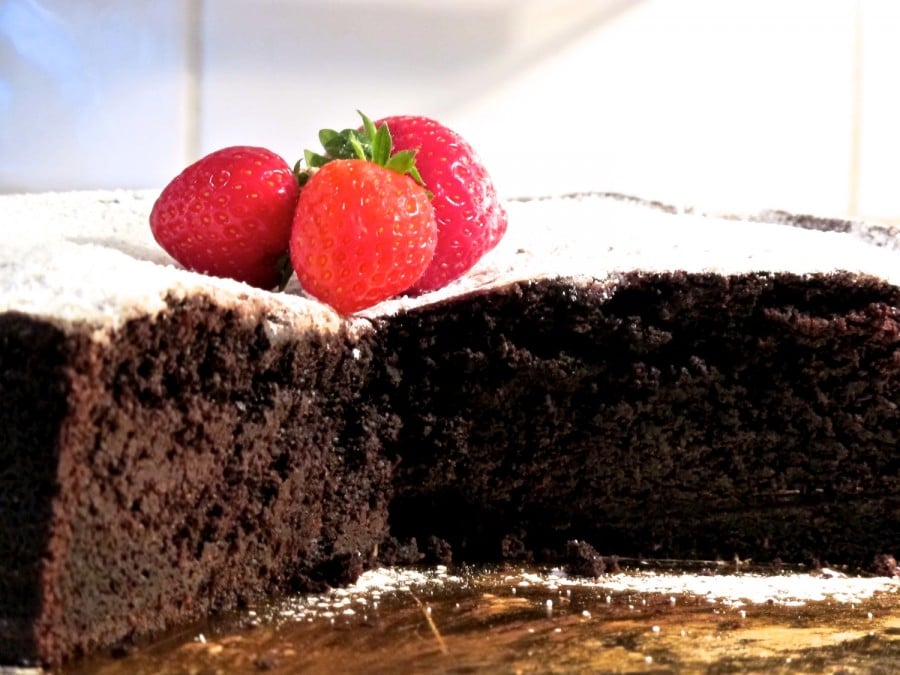